Lyon during the Resistance Guided tours

Jean Moulin and the Armée des Ombres (Army of Shadows)

Follow the footsteps of Jean-Moulin and the major figures of the French Resistance in Lyon. Along a route that will take you from Place des Terreaux to the maze of narrow streets, stairways and traboules (hidden passageways) on the slopes of Croix- Rousse hill, and then across the Presqu’île district, you will understand better why and how the Resistance networks made Lyon their base.

Thanks to its strategic geographical location, on the edge of the Demarcation line, Lyon became the centre of the largest region of the Resistance. It lived under the Vichy regime between two German occupations.

What was Jean Moulin’s role? Who were the main figures of the various movements? What were the different forms of resistance, which involved elected representatives, members of the army, the press and clandestine printing works, as well as intellectuals and religious movements? You will learn the answers to all these questions.

The situation of Jews in Lyon is discussed with the roundups that took place on Rue Sainte-Catherine and the surrounding area, anti-Jewish laws and the role of the militia.
What were the daily lives of the city’s residents like during the war, with food rations, curfews, secrecy and denunciations?

This fascinating tour, which takes a look back at anonymous and famous heroes, ends on the banks of the Saône, by the law courts where Klaus Barbie faced trial.

Please ensure you arrive 10 minutes before the tour commences
Booking is necessary
Cancellation free of charge 72 hours before schedule activity
This tour is suitable for ages 14 and above.
Children and minors remain under the responsibility of their parents during this visit. The participation of an adult is mandatory for each reservation 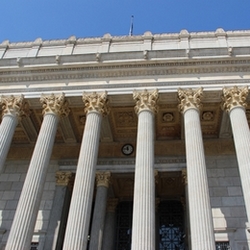 A historic trial in Lyon

The highly-publicised trial of Klaus Barbie, head of the Gestapo in Lyon, was held from 11 May to 3 July 1987, in the law courts of Vieux-Lyon, and was attended by many high-profile figures. Videos of the trial can be seen at the Resistance and Deportation History Centre of Lyon. 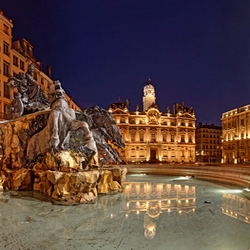 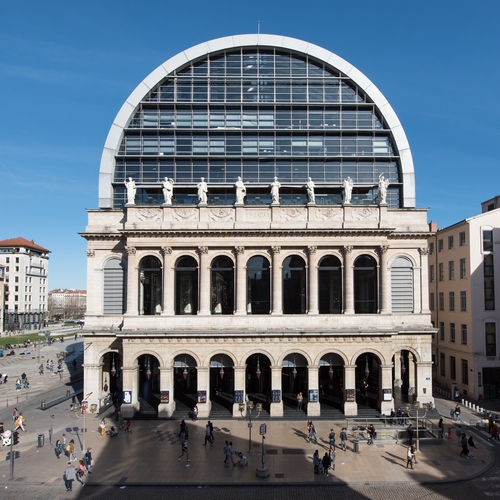 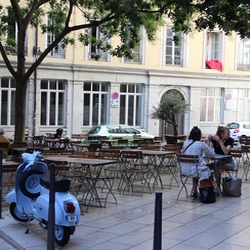 How lucky I am to have been able to study the history of art and archaeology in Lyon. It's magic! From the Roman theatres to the Musée des Confluences, past, present and future combine in beauty and harmony, just like the gold, silver and silk threads woven by the canuts.

Let's set out for a spot of "trabouling" with Rabelais' ghost, who will lead us from Hôtel-Dieu to the wealthy homes of the merchant bankers in Vieux-Lyon, stopping at inns, bouchons or star-rated restaurants on the way…

Let your eyes feast on the golden light that's worthy of Italy, and gilds the slopes of Croix-Rousse on summer evenings as you stroll along the embankment amid the seagulls and boats.

I love this city because life is so sweet here, and I love telling visitors all about it, as the enthusiastic urbanist in me sees the city as a living organism.

My tours invite you to view the city like a tightrope walker balancing between light-heartedness and knowledge, gastronomy and architecture, silk and alchemy, football and botany, cinema and historic periods... And many other subjects that are the essence of Lyon.

Although I'm interested in the world in general, I chose to return to the city where I grew up, not to work but to pursue a passion: guiding visitors through Lyon, my home town. I will take you on a trip through time, from past to future, in a city where you can never be bored, and where there's something of interest for every generation. .

So if you want to discover the different areas in Lyon like a real little "gone" (street urchin), don't hesitate to follow me! I've worn out many pairs of trainers in the traboules and on the slopes of the three hills, I'm acquainted with Guignol's entire repertoire, and know where you can enjoy the best mâchons.

If you're interested, I'll be waiting under the horse's tail!

When seeking to share Lyon's heritage with people, I like to broach the question from the viewpoint of technical skills and know-how, and even economy, whether it's architecture and town planning, or vineyards and gastronomy.

This guided tour is included
with the
Lyon City Card
The essential pass to have on hand! The Lyon City Card is the pass
you need for your next stay in Lyon.
MUSEUMS AND EXHIBITIONS | ATTRACTIONS | TRANSPORT
GUIDED TOURS | PUPPET SHOW | SHOPPING | WIFI
More about 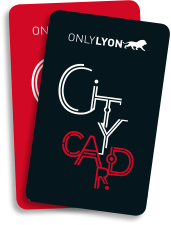